Bulimia is a disease that can affect as many as 3 percent of women and 0.1 percent of men, and which can have a devastating impact on people who struggle with the condition. Indeed, as an eating disorder, bulimia can affect many people and can truly change their lives for the worse.

Bulimia is being seen on an increasingly common basis nowadays, with the median age for people with the condition being 18 years old. People who have bulimia will regularly have been diagnosed with historic eating disorders; according to healthyplace.com, one-third of all bulimia patients may have been suffering from an eating disorder prior to getting bulimia.

Bulimia itself is generally considered to be less severe anorexia, due to the fact that patients typically will not suffer from quite as extreme weight loss when suffering from bulimia. However, that is not to say that bulimia is a condition that should be overlooked; if untreated, the condition can still have severe consequences. This is especially the case when bulimia is allowed to continue for a long period of time, such as over a matter of years.

While it is worthwhile to note that whilst bulimia itself is a less severe type of eating disorder, the condition should never be underestimated. Research has shown that as many as 0 to 3 percent of all women who are diagnosed with bulimia will eventually go on to succumb to the disease; often, the disease will lead on to numerous different complications that can cause the individual to die as a result of struggling with bulimia.

In addition to this, bulimia sufferers often will be struggling from other mental health conditions alongside the bulimia; this can result in these individuals have serious mental health difficulties and can further contribute to the above statistic (which may or may not be underestimated).

As is the case for many eating disorders, people may often fail to recognize the symptoms of bulimia in their family member, friend, or loved one; this can lead to the disease continuing to cause difficulties for a person without the rest of their peers noticing the problem until it has progressed further on.

Specifically speaking, bulimia is an eating disorder, although the specifics of the condition are not well understood by scientists and researchers. It is widely believed, though, that bulimia can be triggered by a full range of different factors; environmental, genetic, and behavioral factors all seem to have a significant role in the development of the disease.

Symptoms of bulimia are much the same as symptoms of other eating disorders, including an unwillingness to eat, and subsequent binge eating; this is then followed by ridding the body of the food that has been consumed by inducing vomiting.

In addition to this, other symptoms can include a fear of putting on weight and a resulting avoidance of social activities that include calorific consumption, mood changes, and feelings of guilt and shame about weight. As well as this, physical signs such as feeling fatigued can also result from a lack of energy.

The erosion on the lower teeth was caused by bulimia. For comparison, the upper teeth were restored with porcelain veneers. Picture by Jeffrey Dorfman [CC BY-SA 3.0], via Wikimedia Commons 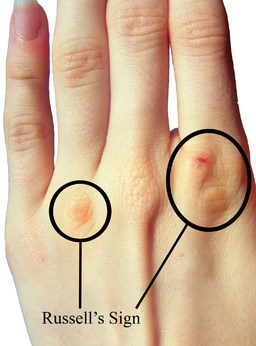 Russell’s sign, named after British psychiatrist Gerald Russell, is a sign defined as calluses on the knuckles or back of the hand due to repeated self-induced vomiting over long periods of time. The condition generally arises from the afflicted’s knuckles making contact with the incisor teeth during the act of inducing the gag reflex at the back of the throat with their finger(s). Ref: Wikipedia